Yet even with these accomplishments, Post.Bid.Ship. still has much more work remaining before we can be officially called a “success.” We first must cross the ‘chasm’.

There are five main market segments that are recognized by marketers of technology: innovators, early adopters, early majority, late majority and laggards. The most difficult step for a technology start-up is making the transition from ‘early adopters’ to ‘early majority’, also known as the ‘chasm’. This is the marketing phase our team at Post.Bid.Ship. is currently navigating. 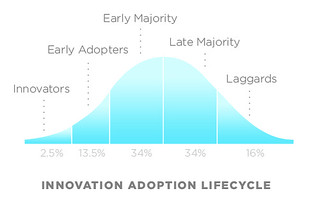 While entrepreneurs are never guaranteed success, Jarret and I are lucky to be born in the United States where taking risks is promoted, failure is worn like a badge of courage, success is credited to the team who made it happen and blessed describes all involved for dreaming big and building it. ‘Crossing the Chasm’ is just one of the many milestones entrepreneurs like Jarret and me must navigate in our goal of transitioning from leading a ‘successful start-up’ to leading a ‘successful company’. Here’s to seeing you one day on the other side of the chasm!